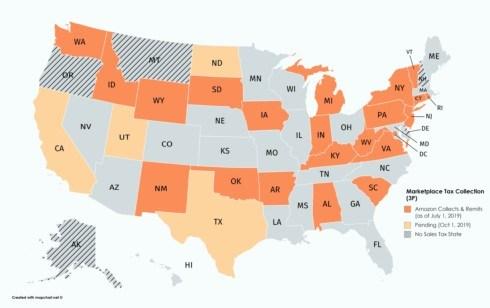 About 60% of Amazon sales are via third-party sellers. They pass thru what it calls the 'marketplace.' These Amazon purchases have not historically been taxed because the purchase is made from a business in one state and shipped to another state. But that loophole started to close last year when the Supreme Court ruled that states can collect tax on these types of Internet purchases.

Many state laws have acted on that Supreme Decision, closed these loopholes, and activated their new tax collection laws. Many of these laws, including New York's, went into effect very recently. This map shows the current status of tax collection for Amazon marketplace purchases.

In general, the more states that are orange, the better that is for indie stores. When states don't collect tax on all Internet-based purchases, that often puts indie stores at 6% ot 9% price disadvantage.

For example, New York State just closed the Internet tax loophole in June 2019. The tax rate in New York City is 8.75%. Before June 2019, when local indie gift shop William-Wayne & Co. competed for an order against an online entity that doesn't have a presence in the state, the online entity wouldn't have to charge the 8.75% tax. From which store would you rather buy: the one that is 8.75% more expensive or 8.75% cheaper? Due to the Supreme Court ruling, and the recent NY State law, William-Wayne & Co. and the online business now both charge sales tax.

This approach is also a win for communities because more money will be paid in taxes. Indie stores win. Schools and hospitals win.

Companies like Wayfair fought to stop the Supreme Court's ruling. This makes one question why a nurse, for example, would shop at Wayfair when Wayfair sought to de-fund local entities like hospitals.

Since Amazon knew this Supreme Court ruling may hurt its competitiveness, it has dramatically increased promoting other advantages like free and expedited shipping.

This site shared the status of each state's marketplace tax collection rules:
https://www.avalara.com/us/en/blog/2019/04/marketplace-providers-to-collect-new-york-sales-tax-for-third-party-sellers-june-2019.html

The source of this map graphic is:
https://www.reddit.com/r/FulfillmentByAmazon/comments/c7zk6m/as_of_july_1_amazon_collects_remits_sales_taxes/