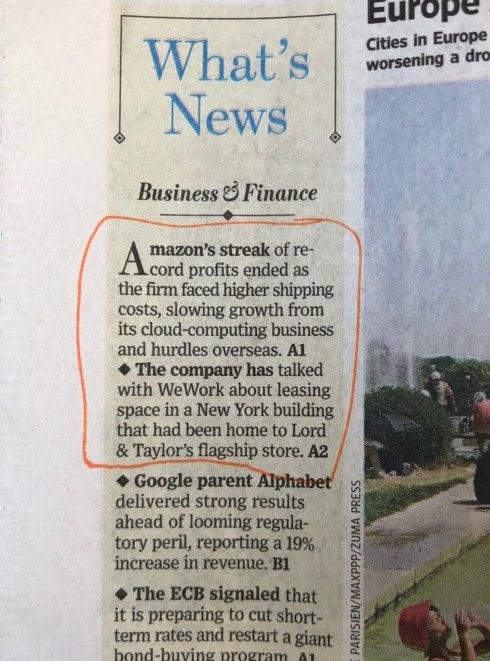 Irony: old analog retail is literally being replaced by new tech. Today’s WSJ shares that retail space that used to belong to Lord & Taylor’s midtown flagship may become Amazon’s NYC office space. In the East Village, Facebook’s HQ recently took over Kmart’s entire third floor, shrinking Kmart from three floors to just two. That’s a 33% contraction, which mirrors the contraction of physical retail and the growth of digital platforms like Amazon and Facebook. Note: Lord & Taylor, Kmart, and many other retailers could’ve been the ones charting their future but their leaders didn’t act quickly. In fact, it’s not that they didn’t act quickly, many just didn’t act. Many were laggards to accept new technology and make technology investments. Imagine you were able to see Lord & Taylor or Kmart’s website budgets in 2000 or 2005. Whatever they spent, it should’ve likely been 10x what it was. These early years were key to laying the groundwork.

With that said, it’s easy to be an arm chair quarterback. Many things had to be done by many ambitious people over decades to get Amazon and Facebook this far. But, we can ask: what are we doing today to be ready in 10 years? Is it possible your store’s space could be a tech office by 2029? If so, what can you do to be the one in that office instead of left out like Lord & Taylor? Shared by Jason Solarek
at Bridge